“Give your baby more formula milk so your baby can sleep better”.

You may have heard this bottle feeding myth from well-intentioned but misguided relatives, confinement nannies or friends. We collate a few bottle feeding myths from local parents and suss out the fact from fiction. Whether you’re feeding formula milk or breastmilk, watch out for the myths below. 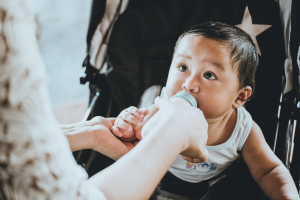 Feed your baby the recommended stage of infant formula milk according to your paediatrician’s advice to ensure that your baby is fed adequately and appropriately.

#1:“Feed your baby some water after milk to let your baby get accustomed to the taste of water. ”

“My mother-in-law assisted me during my confinement period, and she insisted on feeding my newborn with water after every feed. Her reasoning was that children needed to be fed water early on to get used to the taste of water”, recounts Jaclyn, mom to son Keanan, 1 year old.

Not only is this bottle feeding myth untrue, it is dangerous. A newborn’s stomach is tiny and even a small amount of water can dilute the electrolytes in the baby’s bloodstream, leading to serious issues such as low body temperature, seizures and in worse cases, brain damage or death.

#2:“Feeding your baby while she is lying down is more comfortable for both of you.”

As a first-time mother to Elysha, Yaz was unsure of the right way to feed her baby, and a relative told her that feeding her baby lying down was the most comfortable for both her baby and her.

The truth is that bottle fed babies should be fed at an incline to prevent painful middle-ear infections. These tips help you keep both you and baby comfortable during bottle feeding.

“My confinement nanny, who claimed to be highly experienced, confidently told me that she would add in a bit more formula in the bottle to keep babies fuller for longer. It wasn’t until later that my baby suffered from constipation that I realised it was a wrong practice,” says Esther, mum to daughter,Ellie.

Formula milk is nutritionally adequate with essential vitamins, minerals and nucleotides for development but it has to be prepared in strict accordance to the manufacturer’s instructions that are found on each tin.Too much formula may cause constipation while watered down formula could create an imbalance of electrolytes in the baby’s bloodstream. Einmilk formula milk is available for babies and toddlers in shops in Singapore, and parents should pick the right stage for their children. 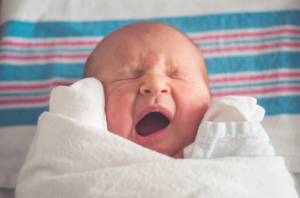 Babies under six months old drink infant formula milk, and do not require any water.

Mum-of-two Jasmine had a medical condition that prevented her from breastfeeding and used formula milk from the beginning. One of the most hurtful remarks she heard was from an ex-friend who told her that her baby wouldn’t be close to her because she was not breastfeeding.

While breastfeeding has its benefits for both mother and baby, it is not the only way parents can bond with their babies. Bonding can happen in various ways. Singing, cuddling, eye contact, gentle caresses and talking to your baby can build up a strong and unbreakable bond.

What’s the most surprising bottle feeding myth that you’ve heard and debunked? Share it in the comments for other parents to know!

Nipple confusion refers to a situation where a baby develops problems with latching on the breast after he or she is used to drinking milk from a bottle. Nipple confusion could also arise from being given a pacifier.

Although both latching and sucking from a bottle appear to be the same, the mechanics of breastfeeding are fundamentally different. Breastfeeding is an acquired technique.

Firstly, babies have to open their mouth wide and use their tongue and lower jaw to hold the breast against the roof of their mouth. Then, they use their gums to compress the areola while their tongue moves in a rhythmic front-and-back fashion to draw out milk. To take a break, the baby just needs to stop sucking.

Babies can get frustrated when they have nipple confusion and are unable to feed well.

When babies are fed formula milk or expressed breast milk in a baby bottle, there is not as much technique needed to draw milk out. Some new parents in Singapore may think that baby is rejecting the infant formula milk, but that is usually not the case.

As milk flows from the bottle due to gravity, any action that they make with their mouth and gums will get milk flowing out of the bottle. Therefore, babies can suck only with their lips or clamp down on the teat with their gums. Babies drinking from milk bottles depend on their caregivers to physically remove the bottle from their mouths in order for them to take a break from feeding. This is because as milk flows from a bottle even when baby is not sucking, the baby is forced to continue feeding.

The benefits of breastfeeding for both infants and mothers have been widely publicised and for mothers who direct latch, encountering nipple confusion can pose an obstacle to breastfeeding.

To prevent nipple confusion and encourage your baby to latch on well, it is advised that you avoid giving your baby a pacifier or any type of artificial nipple (including bottle teats) for at least the first 3 to 6 weeks. This duration is to give your baby enough time to master the technique of latching efficiently. If there are problems with latching or if you feel extreme pain when your baby latches, consult an International Board Certified Lactation Consultant who will guide you. Or, speak to the Lactation Consultants from the hospital that you delivered your baby at.

How to prevent nipple confusion

Guiding a baby with nipple confusion back to latching To manage nipple confusion: After your baby has mastered the technique of latching on, you can introduce milk bottles, ideally after four weeks of age.

After your baby is confident with latching and is more than 6 weeks old, you can try introducing milk bottles. Be sure that the bottle teats are of the appropriate type for your baby so that the flow of milk does not choke your baby.

When you are ready to wean your baby, you can check these tips to transit your baby from breast milk to formula milk. Pick the age-appropriate stage of formula milk for your infant or toddler to ensure he gets adequate nutrients for healthy development. One major difference you will notice is that their poop colour may change when you introduce formula milk to them.

Has your baby experienced nipple confusion? What did you do to overcome it?