Nipple confusion refers to a situation where a baby develops problems with latching on the breast after he or she is used to drinking milk from a bottle. Nipple confusion could also arise from being given a pacifier.

Although both latching and sucking from a bottle appear to be the same, the mechanics of breastfeeding are fundamentally different. Breastfeeding is an acquired technique.

Firstly, babies have to open their mouth wide and use their tongue and lower jaw to hold the breast against the roof of their mouth. Then, they use their gums to compress the areola while their tongue moves in a rhythmic front-and-back fashion to draw out milk. To take a break, the baby just needs to stop sucking. 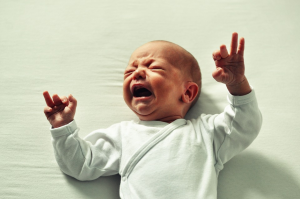 Babies can get frustrated when they have nipple confusion and are unable to feed well.

When babies are fed formula milk or expressed breast milk in a baby bottle, there is not as much technique needed to draw milk out. Some new parents in Singapore may think that baby is rejecting the infant formula milk, but that is usually not the case.

As milk flows from the bottle due to gravity, any action that they make with their mouth and gums will get milk flowing out of the bottle. Therefore, babies can suck only with their lips or clamp down on the teat with their gums. Babies drinking from milk bottles depend on their caregivers to physically remove the bottle from their mouths in order for them to take a break from feeding. This is because as milk flows from a bottle even when baby is not sucking, the baby is forced to continue feeding.

The benefits of breastfeeding for both infants and mothers have been widely publicised and for mothers who direct latch, encountering nipple confusion can pose an obstacle to breastfeeding.

To prevent nipple confusion and encourage your baby to latch on well, it is advised that you avoid giving your baby a pacifier or any type of artificial nipple (including bottle teats) for at least the first 3 to 6 weeks. This duration is to give your baby enough time to master the technique of latching efficiently. If there are problems with latching or if you feel extreme pain when your baby latches, consult an International Board Certified Lactation Consultant who will guide you. Or, speak to the Lactation Consultants from the hospital that you delivered your baby at.

How to prevent nipple confusion

Guiding a baby with nipple confusion back to latching

To manage nipple confusion: After your baby has mastered the technique of latching on, you can introduce milk bottles, ideally after four weeks of age.

After your baby is confident with latching and is more than 6 weeks old, you can try introducing milk bottles. Be sure that the bottle teats are of the appropriate type for your baby so that the flow of milk does not choke your baby.

When you are ready to wean your baby, you can check these tips to transit your baby from breast milk to formula milk. Pick the age-appropriate stage of formula milk for your infant or toddler to ensure he gets adequate nutrients for healthy development. One major difference you will notice is that their poop colour may change when you introduce formula milk to them.

Has your baby experienced nipple confusion? What did you do to overcome it?